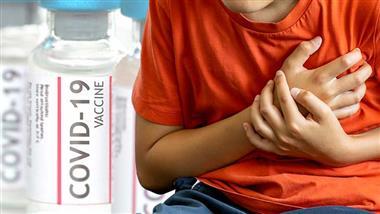 Yet another study has revealed people who receive a COVID-19 shot are at an increased risk of myocarditis, or inflammation of the heart muscle.1 With symptoms similar to a heart attack, including chest pain, shortness of breath, abnormal heartbeat and fatigue,2 myocarditis isn’t something that young, healthy adults typically experience.

But soon after mRNA shots for SARS-CoV-2 became widespread, reports of myocarditis, including sudden death, began to emerge.3 In Canada, more than 32 million people had received COVID-19 shots as of September 2022.4

“Prelicensure study data did not suggest any risk of postvaccination myocarditis,” researchers with the British Columbia Centre for Disease Control wrote in the Canadian Medical Association Journal (CMAJ). However:5

“[P]ostmarketing studies have suggested an association between mRNA SARS-CoV-2 vaccines (BNT162b2 [Pfizer-BioNTech] and mRNA-1273 [Moderna]) and myocarditis, among other adverse events after immunization, which has raised concern regarding the safety of mRNA vaccines, specifically among younger populations.”

Getting a COVID-19 Shot Increases Risk of Myocarditis

The study used data from the BC COVID-19 Cohort study, which included more than 10.2 million doses of mRNA COVID-19 shots given to people 12 and over. Cases of myocarditis that occurred seven to 21 days after the shots and required hospitalization were examined. While seven myocarditis cases would be expected within seven days, the study found 99 cases among those who’d received the shots.

Comparisons of observed with expected rates also confirmed these findings, with the highest observed-to-expected ratios among males 18–29 years of age after the second dose of the mRNA-1273 vaccine.”

Many case reports exist of myocarditis following COVID-19 jabs, but they’re still recommended as safe and effective in the U.S. The Journal of Cardiology Cases described the case of a 23-year-old man who was otherwise healthy, who experienced chest pain for three days after receiving the second dose of Pfizer’s COVID-19 shot.

Myocarditis was confirmed via MRI and other medical tests, and he was diagnosed with “acute myocarditis after COVID-19 vaccination.”10 In another example, researchers reviewed nine case series and 15 case reports involving 74 patients of myocarditis after mRNA COVID-19 shots. Again, most of the patients (94.6%) were male and young, with a median age of 17.6 years.11

In a September-October 2021 case report with literature review, it was concluded that “the outcomes of this case scenario confirm myocarditis as a probable complication of COVID-19 vaccines.”12 Another study from Israel detailed myocarditis following Pfizer’s COVID-19 jab in six male patients with a median age of 23 years.13

A similar study published in Pediatrics reported seven cases of acute myocarditis or myopericarditis in otherwise healthy adolescent males. Each had experienced chest pain within four days of receiving the second dose of Pfizer’s COVID-19 jab.14

Data published in JAMA Cardiology by physicians from the Navy, Army and Air Force also revealed a higher-than-expected rate of myocarditis in U.S. military personnel who received a COVID-19 jab.15

And a real-world case-control study from Israel16 revealed that the Pfizer COVID-19 jab is associated with a threefold increased risk of myocarditis,17 leading to the condition at a rate of 1 to 5 events per 100,000 persons.18 Other elevated risks were also identified following the COVID jab, including lymphadenopathy (swollen lymph nodes), appendicitis and herpes zoster infection.19

The U.S. Centers for Disease Control and Prevention (CDC) acknowledges that COVID-19 shots are associated with an increased myocarditis risk, stating:20

These rare cases of myocarditis or pericarditis have occurred most frequently in adolescent and young adult males, ages 16 years and older, within 7 days after receiving the second dose of an mRNA COVID-19 vaccine (Pfizer-BioNTech and Moderna).”

However, despite the risk, the CDC is still advising children aged 12 and older to get the jab, and the U.S. Food and Drug Administration granted full approval August 23, 2021, to Pfizer’s COVID-19 mRNA injection, now sold under the brand name Comirnaty, for people aged 16 and older.22

FDA does list myocarditis on the prescribing information for COVID-19 shots,23 and in its approval letter for Comirnaty, the FDA ordered Pfizer to conduct research to investigate the risk of inflammation in and around the heart, as voluntary reporting mechanisms are insufficient.24

The FDA accepted Pfizer’s suggested timetable for the post-approval study to evaluate incidence of heart and heart sack inflammation, which includes the submission of an interim report at the end of October 2023, a study completion date of June 30, 2025, and submission of a final report October 31, 2025.

“… the number of serious cases that we see of COVID in children this age are really very small. There are uncertainties about the long-term implications of (myocarditis), and that makes the risk-benefit balance for these children really quite tight and much tighter than we would be comfortable to make the recommendation.”

In contrast, the CDC has downplayed the risks, stating that most people should still get jabbed: “The Advisory Committee on Immunization Practices (ACIP) and CDC have determined that the benefits (such as prevention of COVID-19 cases and its severe outcomes) outweigh the risks of myocarditis and pericarditis after receipt of mRNA COVID-19 vaccines.”26

Others, however, aren’t so sure. Cardiologist Dr. Aseem Malhotra has spoken openly about the shots’ downfalls. He said in “Safe and Effective: A Second Opinion,” a documentary by Oracle Films:27

“Having been double jabbed and being one of the first to take the Pfizer vaccine, I have — after several months critically appraising the data, speaking to eminent scientists in Oxford, Stanford and Harvard, speaking to two investigative medical journalists and being contacted by two Pfizer whistleblowers — reluctantly concluded that this vaccine is not completely safe and has unprecedented harms, which leads me to conclude that it needs to be suspended until all the raw data has been released for independent analysis.”

Myocarditis reduces your heart’s ability to pump and can cause rapid or abnormal heart rhythms that can be deadly. In severe cases, myocarditis can cause permanent damage to the heart muscle and lead to heart failure, heart attack, stroke and sudden cardiac death.28 Tragic stories have accumulated worldwide:

If you’re wondering why you haven’t heard more about these and other cases, it’s because Big Tech has tried to censor these stories and keep them from getting out. But the truth has a way of finding the light.

A U.S. judge ruled that the White House must release correspondence regarding a “massive censorship enterprise” with Big Tech; it’s alleged that federal agencies communicated with social media companies to suppress private speech during the pandemic.34,35

Open debate and access to data from all sources is crucial to proper informed consent, including learning why some experts believe myocarditis due to COVID-19 shots “will kill kids,” without a doubt.36