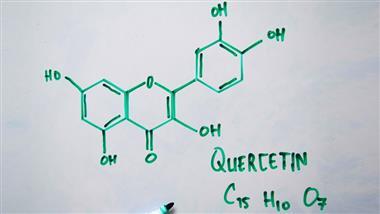 Quercetin is an antioxidant flavonol that’s found in foods such as red grapes, green tea, elderflower and onions, to name a few.1 As the health benefits of the supplement become more widely known, the market has grown rapidly.2 According to market research, quercetin market was worth $261.12 million in 2020 and is expected to reach $406.58 million in 2027.

Quercetin has a wide range of benefits, which has made it useful for a variety of different health conditions. In the last two years, the antiviral benefits of quercetin have been the focus of many studies.3 However, there are other, lesser-known benefits, including the effects as a senolytic agent against senescence-mediated cancer growth.4

It is perhaps most well-known as a strong antioxidant5 and antiviral.6 For example, Elderflower extract, which is rich in quercetin, is a traditional tonic used to boost immunity. In supplement form, quercetin has been used to prevent and treat the common cold and influenza.7

According to Mount Sinai,8 quercetin should be used with caution as it may interact with certain antibiotics by reducing the effectiveness of the drug. It may also enhance the effect of some blood thinners, which can increase your risk of bleeding. In addition to these, it may interact with corticosteroids, digoxin, cyclosporine and fluoroquinolones.

A paper9 published in August 2022 in Nutrition Research analyzed the pro-apoptotic effect that quercetin has on aging cells. The paper reviewed preclinical and early phase data using quercetin as a senolytic agent and found the data showed it was effective in “preventing or alleviating cancer formation.”

Cellular senescence is a dynamic and multi-step process that is associated with alterations in metabolic activity and gene expression.11 This can compromise tissue regeneration and contribute to aging. On the other hand, by removing senescent cells, age-related dysfunction can be attenuated and potentially extend the lifespan.

One paper12 published in 2008 recognized that animal studies had demonstrated quercetin could prevent chemically-induced cancer growth and epidemiological studies found it was associated with preventing lung cancer. One study13 focused on the effect that physiologically attainable doses of quercetin had on the inhibition of cancer cell proliferation. The researchers believed their study demonstrated quercetin had chemopreventive properties.

Lab studies14 have also demonstrated that quercetin is a strong antioxidant and has pro-apoptotic effects on tumor cells, with the ability to block growth at different phases of the cell cycle. Research15 also has demonstrated that quercetin can promote the loss of cell viability and autophagy through several pathways, including those involving mitochondrial function and glucose metabolism.

Data16 indicate that quercetin could play a role in cancer treatment as it reportedly has synergistic effects in combination with chemotherapy agents or radiation therapy. Quercetin has also shown promising results with chemoprotective and radioprotective properties, by protecting normal cells against the effects of chemotherapy and radiation therapy.

One paper17 identified some of the anti-inflammatory, antioxidant and antiproliferative properties quercetin has that enhances breast cancer treatment, while another18 evaluated its effect on the treatment of ovarian cancer, which is a serious cancer growth and threat to women’s health.

The strength of the antioxidant properties of quercetin is likely one factor in the ability to improve mood-related behaviors in animal studies where the subjects underwent sleep deprivation. A study19 published in 2022 used a sleep deprivation model using 30 male albino mice. The mice were split into five groups.

The intervention groups received either astaxanthin or one of two doses of quercetin. Their activities were monitored, and brain samples were later collected. Researchers found that during persistent wakefulness, the animals experienced anxiety and depression-like behavior. In the sleep-deprived group, brain samples showed an enhancement in prooxidants.

In the group pretreated with quercetin, these behaviors were reversed. The researchers found that quercetin could reduce anxiety caused by sleep deprivation in the animals.20 The structure of this study was similar to another21 published in 2021 in which the researchers split the animals into five groups that received the same intervention and sleep deprivation just described.

The researchers hypothesized, and the data showed, that quercetin ameliorated the effects of sleep deprivation on memory performance, depression-like behavior and against the loss of prefrontal cortex neurons. Researchers have been interested in how the powerful antioxidant effects of quercetin might mitigate the damage and impairment commonly found following sleep disruption.

In one study22 published in 2016, the researchers hypothesized that quercetin could reduce the manic-like behavior induced by 24 hours of paradoxical sleep deprivation in mice. Paradoxical sleep is another name given to rapid eye movement (REM) sleep, the deprivation of which has led to chronic conditions such as obesity and stress disorders in people.23

In the animal study,24 the researchers found that quercetin blocked hyperactivity that was induced by sleep deprivation. In another study,25 researchers hypothesized that the deficits in the hippocampal area associated with sleep deprivation could be ameliorated with a preparation of grape seed polyphenol extract, concord grape juice and resveratrol.

Quercetin has been studied for its antiviral effect and has proven to show inhibition in the early stages of a flu infection26 and is a promising agent against Epstein Barr Virus,27 Zika virus,28 Hepatitis B29 and rhinovirus30 responsible for the common cold.

It was only logical then, as the COVID-19 pandemic emerged, that researchers would investigate the efficacy of quercetin against the SARS-CoV-2 virus. In the early months of the declared pandemic, a review31 was published that found the administration of bromelain, quercetin, vitamin C and zinc “showed promising results in improving clinical outcomes among COVID-19 patients.”32

In this paper, the researchers identified the antioxidant’s ability to inhibit proinflammatory cytokines and to clinically block human mast cell cytokine release as an important property in the fight against severe COVID-19 disease, which is associated with increased levels of cytokine production. They also identified the independent actions that bromelain has in activating a healthy immune system.

However, bromelain and vitamin C play another role in the administration of quercetin. Because quercetin is generally not soluble in water, it can be poorly absorbed. When administered with bromelain or vitamin C, it increases the absorption and bioavailability of the antioxidant.33

Bromelain is a proteolytic enzyme found in the stem of the pineapple plant.34 Independently, it has been used as a supplement to help reduce swelling after surgery or injury, or in the nose and sinuses. It is also applied topically to help treat burns.

The combination of quercetin with bromelain or vitamin C has also been a part of several successful protocols used to treat COVID-19.35,36 Quercetin is a zinc ionophore,37 which helps improve the cell’s ability to absorb zinc where it is effective as an antiviral.38

Dr. Vladimir Zelenko was among the first physicians to discover and implement a treatment that has been credited with saving millions of lives around the world.39 His early protocol used hydroxychloroquine,40 another zinc ionophore. However, as research data showed that quercetin was as effective as hydroxychloroquine, his early treatment options for low-risk patients included quercetin with vitamin C and zinc.41

Sadly, Dr. Zelenko passed away on June 30, 2022, at the age of 48 after a long battle with cancer. While treating patients, he oversaw the treatment of roughly 7,500 people using his protocol, during which time only three patients died.42

More Benefits of Quercetin and Bromelain

One review of the literature44 found quercetin is “a strong anti-inflammatory weapon” that may be used in the fight against inflammatory diseases, such as obesity and Type 2 diabetes. Another revealed45 that supplementation could reduce systolic blood pressure, and a third animal study46 demonstrated that supplementation with quercetin and exercise could reduce atherosclerotic plaque formation.

Quercetin has also shown promise in relieving the symptoms of allergies. It works by inhibiting histamine release and decreasing proinflammatory cytokine production and leukotrienes creation.47 The combination of quercetin and bromelain or vitamin C has also been promoted to help improve athletic performance based on the antioxidant potential of both flavonoids.48,49,50 Quercetin has also been studied for the positive health benefits it has on:

Quercetin From Food and Supplements

Considering the wide-ranging benefits that quercetin has on human health, it could be a useful supplement for many, whether it is used acutely or long-term. It is one of the supplements I recommend keeping in your medicine chest for times when you may be feeling as if you’re getting an upper respiratory infection. If you’re prone to colds and flu, consider taking it for a couple of months before the cold and flu season hits to support your immune system.

If you feel as if you have a cold or flu, consider using quercetin with bromelain or vitamin C in addition to zinc.60 Over-the-counter zinc lozenges make it easy to consume zinc for the short time it’s needed when you’re feeling ill. Be sure to eat before taking zinc as it can make you nauseous.

For comparison, the American Heart Association61 reports that the average adult consumes 77 grams of sugar each day, which is more than three times the recommended amount for women. The number for children is even worse, with the average American child consuming 81 grams of sugar per day. Sugar-laden beverages are the leading source of added sugars in the diet.

Quercetin can function in several pathways to help reduce your risk of cancer. In addition to reducing the inflammatory response in your body and thus your risk of obesity and obesity-related cancer,62 it also promotes apoptosis at the cellular level to prevent cancer.63 When combined with exercise and reduced sugar consumption, you are making strong steps toward taking control of your health.