Quercetin was initially found to provide broad-spectrum protection against SARS coronavirus in the aftermath of the SARS epidemic that broke out across 26 countries in 2003.1,2,3 Now, some doctors are advocating its use against SARS-CoV-2, in combination with vitamin C, noting that the two have synergistic effects.

Similarly, vitamin C at extremely high doses also acts as an antiviral drug, effectively inactivating viruses. During the 2003 SARS pandemic, a Finnish researcher called6 for an investigation into the use of vitamin C after research showed it not only protected broiler chicks against avian coronavirus, but also cut the duration and severity of common cold in humans and significantly lowered susceptibility to pneumonia.

While high-dose vitamin C is new for COVID-19 treatment, it’s been used as a treatment for sepsis since about 2017. The vitamin C-based sepsis treatment was developed by Dr. Paul Marik, former critical care doctor at Sentara Norfolk General Hospital in East Virginia, which has since adopted it as standard of care for sepsis.

In the interview above, Marik explains how the COVID-19 critical care protocol grew out of his sepsis treatment, as he and other doctors noticed there were many similarities between sepsis and severe COVID-19 infection, in particular the out-of-control inflammatory cascade.

To address the differences between the two conditions, a group of doctors, including Marik, founded the Front Line COVID-19 Critical Care Working Group7 (FLCCC), and began developing a modified protocol specifically for COVID-19.

Known as the MATH+ protocol,8,9 it involves the use of three key medicines, all of which need to be started within six hours of hospital admission:

The initial MATH+ protocol10 was released in April 2020. In early July and August, it was updated11,12 to include quercetin and a number of optional nutrients and drugs, not only for critical care but also for prophylaxis and mild disease being treated at home.

There is evidence that vitamin C and quercetin co-administration exerts a synergistic antiviral action due to overlapping antiviral and immunomodulatory properties and the capacity of ascorbate to recycle quercetin, increasing its efficacy.

For prophylaxis, the FLCCC recommends:13

The at-home treatment for mildly symptomatic patients is very similar, but adds several optional drugs, including aspirin (ASA), famotidine (an antacid), ivermectin (a heartworm medication that has been shown to inhibit SARS-CoV-2 replication in vitro14). (For dosages, see the Critical Care Management Protocol15 summary, available on the Easter Virginia Medical School’s site.)

They also recommend monitoring your oxygen saturation with a pulse oximeter and to go to the hospital if you get below 94%. The medical evidence to support each drug and nutrient can be found under “Medical Evidence”16 on the FLCCC’s website.

In July, the in-hospital protocol was revised17 again to include thiamine (which is also a key ingredient in Marik’s sepsis protocol). As of the last revision, the in-hospital MATH+ protocol18 calls for:

According to the FLCCC, “By initiating the protocol soon after a patient meets criteria for oxygen supplementation, the need for mechanical ventilators and ICU beds will decrease dramatically.” While heparin is an important part of the protocol due to the clotting complications in the microvasculature of the lung, it is likely that N-acetyl cysteine (NAC) is likely a far better choice as it is far safer and likely as effective.

This is a key point: There are two distinct phases or stages of COVID-19 — the viral replication stage and the immune dysfunction stage — and the treatment must be appropriate for the stage you’re in. Equally crucial is starting aggressive treatment as early as possible. The graphic below details the two stages of disease, and the FLCCC’s suggested treatment focus for each.

Peak viral replication takes place at the earliest signs of symptoms, which include cold/flu-like symptoms, loss of taste and smell, myalgia (muscle pain) and general malaise.

From the time of symptom onset to the time that immune dysregulation starts to set in (accompanied by worsening symptoms) is about five or six days. During this time, you need to aggressively treat, whether you’re at home (see the at-home treatment for symptomatic patients) or in the hospital.

The key remedies in this phase are antivirals (which is what vitamin C, quercetin and zinc are). Anti-inflammatories should be avoided in this phase, Marik warns. Again, if treating at home, be sure to monitor your oxygen saturation with a pulse oximeter. If your oxygen drops to 94% or below when sitting or walking, it’s time to go to the hospital.

If your immune system is unable to successfully combat the virus, then five to six days after first symptoms, early pulmonary dysfunction can set in. At this point, anti-inflammatories — i.e., corticosteroids — and immune suppressive therapeutics are required. 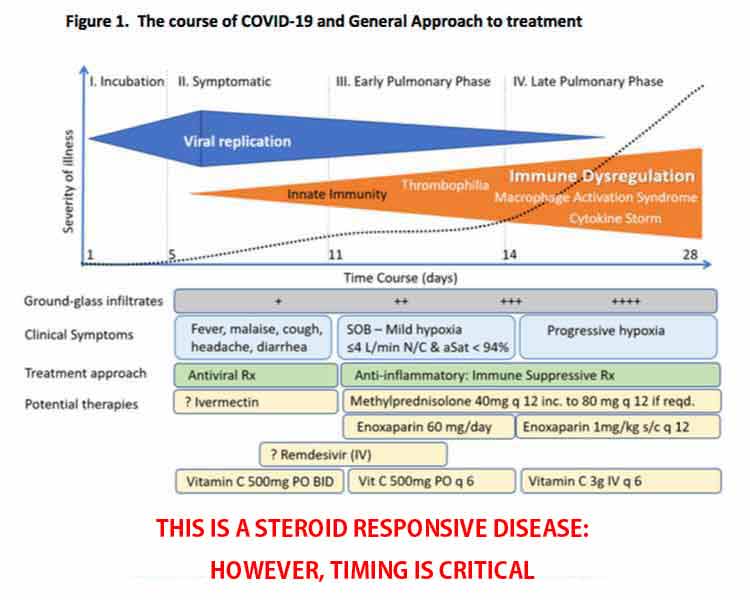 Another important concept explained by Marik in the featured interview is that the inflammatory response rises as the viral load decreases. They do not rise together.

“So, it’s really not the virus that is causing cytopathic effects,” he says. By the time you enter the pulmonary phase of the disease, your viral load has actually significantly decreased, but for some reason the inflammatory response then starts to run amok.

This is why it’s so important to make sure you’re measuring your oxygen saturation. Do not try to treat at home if your oxygen is dropping. Go to the hospital. Again, early treatment is crucial. Hopefully, your doctor will be willing to implement the MATH+ protocol.

Corticosteroids Are a Crucial Component

In a short essay19 co-written by the entire FLCCC team, they express their conviction that the MATH+ protocol is one of the best, most effective, critical care protocols for COVID-19 to date.

“Months ago, early on in COVID19, the FLCCC created the MATH+ protocol based on our physicians’ insights into COVID19 as a steroid-responsive disease.

This treatment recommendation went against all the major national and international health care societies that had misinterpreted the medical literature, a body of published evidence which, upon careful and deep review, actually supported the use of corticosteroids in prior pandemics …

Thousands of patients who became critically ill with Covid19 and who were suffering from massive inflammation may have been saved if this safe and powerful anti-inflammatory medicine had been provided.”

The essay20 stresses the importance of corticosteroids in the treatment of COVID-19, and cites results from the RECOVERY trial,21,22,23 a large, randomized controlled COVID-19 study by the University of Oxford, that validates their recommendation to use corticosteroids as soon as the patient is hospitalized.

In that study, the corticosteroid dexamethasone improved survival by one-third in ventilated patients and one-fifth in those requiring oxygen. However, the FLCCC believes another type of corticosteroid, methylprednisolone, is a better, more effective, choice.

First, because it reaches higher concentrations in lung tissue, and secondly, because it most closely matches the inflammatory gene activation patterns induced by SARS-CoV-2. They also believe the dexamethasone dose used in the RECOVERY trial was too low, especially for severe cases.

“In the hospitals of two of our FLCCC physicians — each having treated over 100 hospitalized patients with MATH+ often early on in the hospitalization, the hospital mortality rate to date is 7% in one hospital (Dr. Paul Marik, Norfolk, Va.) and less than 1% in the other (Dr. Joseph Varon, Houston, Texas),” the essay states.24

June 19, 2020, Marik published the paper,25 “Quercetin and Vitamin C: An Experimental, Synergistic Therapy for the Prevention and Treatment of SARS-CoV-2 Related Disease (COVID-19)” in the journal Frontiers in Immunology, which notes:

“Ascorbic acid is a crucial vitamin necessary for the correct functioning of the immune system. It plays a role in stress response and has shown promising results when administered to the critically ill. Quercetin is a well-known flavonoid whose antiviral properties have been investigated in numerous studies.

There is evidence that vitamin C and quercetin co-administration exerts a synergistic antiviral action due to overlapping antiviral and immunomodulatory properties and the capacity of ascorbate to recycle quercetin, increasing its efficacy.

Safe, cheap interventions which have a sound biological rationale should be prioritized for experimental use in the current context of a global health pandemic.”

The paper presents evidence for the use of vitamin C and quercetin — based on their biological actions and pharmacokinetics profiles — both as prophylaxis in high-risk populations, and as an adjunct to drugs such as Remdesivir or convalescent plasma in the treatment of hospitalized COVID-19 patients.

In the interview, Marik also addresses the issue of “post-COVID syndrome,” which he says is very similar to that of post-sepsis syndrome. In some cases, COVID-19 patients have recovered from the infection, only to die due to pulmonary embolism (blood clots in the lungs) or other organ dysfunction.

A good way to screen for this, Marik says, is to measure CRP, which appear to be a good marker for ongoing inflammation. If CRP is high after recovering from COVID-19, Marik suggests doing a short course of corticosteroids to downregulate the inflammatory response. Aspirin may also be helpful if D-dimer is high. These should be used under medical supervision.

I believe this information needs to be shared far and wide, if we are to prevent more people from dying unnecessarily. More and more, as doctors are starting to speak openly about their clinical findings, we see there are quite a few different ways to tackle this illness without novel antivirals or vaccines, using older, inexpensive and readily available medications and nutrients that are already known to be safe.