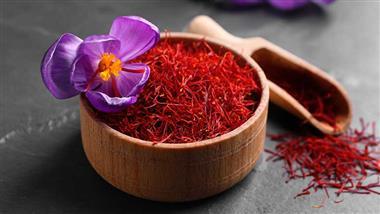 Saffron, stigmas of the purple crocus flower, is one of the most intriguing plants on Earth. It only blooms once a year and has only three stigmas when it does, making it one of the world’s most expensive spices by weight. It takes about 170,000 flowers to produce a single pound of saffron.1

Saffron is primarily grown in Iran but is also cultivated in Afghanistan, Italy, Morocco, Spain, the Netherlands and the U.S. It is usually hand harvested, not mechanically harvested, adding to its significant cost.

Saffron has a centuries-old history as a much sought after herb with healing properties. Kings, queens, pharaohs and monks used saffron in their food and drinks, baths, during prayers and to scent their beds.2 In the Middle Ages, saffron was so highly prized, those who sold adulterated saffron were imprisoned and harshly punished.3

Given saffron’s high price, it’s good to know that in cooking, a “little goes a long way.” For most recipes, a pinch of soaked, dried and crushed saffron threads will do the trick — 1 teaspoon of saffron threads equals about one-eighth teaspoon of ground saffron. In addition to its culinary uses, saffron also has a number of valuable health benefits.

Saffron Is Linked to Many Health Benefits

Its active components exert anticonvulsant, antidepressant, anti-inflammatory and antitumor effects and serve as radical scavengers, according to studies.9 Historically, saffron has been used to relieve the pain of kidney stones and stomach aches.10

A 2013 study published in the journal Pharmaceutical Biology explored saffron’s anticancer properties. After reviewing the current research on saffron, the researchers wrote that:11

“Saffron possesses free radical-scavenging properties and antitumor activities. Significant cancer chemopreventive effects have been shown … Based on current data, saffron … could be considered as a promising candidate for clinical anticancer trials.”

The researchers hypothesize that the anticancer properties may come from:12

Another report showed that saffron contains lectins, which suggested that the antitumor activity of saffron is mediated by lectins … Recently, Amin et al. (2011) showed that saffron exerted a significant chemopreventive effect against liver cancer through inhibition of cell proliferation and induction of apoptosis.”

In addition to disease fighting properties, saffron contains important nutrients like iron, which is good for blood and muscles; magnesium, which is good for nerves, muscles, bones and heart rate; and manganese, which helps regulate blood sugar, metabolize carbohydrates and absorb calcium.

Depression can be a serious condition marked by a persistent sad mood, feelings of worthlessness, difficulty thinking, concentrating and experiencing pleasure and even thoughts of suicide and death.13

Patients with chronic disease, when they also have major depressive disorder (MDD), are at higher risk of heart disease, hormonal disorders, Parkinson’s disease, diabetes and Alzheimer’s disease.14 But the too-widely prescribed antidepressants are no answer to depression and there are serious reasons people avoid them.

Many cannot tolerate the side effects of these drugs, such as weight gain, sexual dysfunction, flattened mood and suicidal ideation.15 Others do not want to take drugs that are difficult to discontinue.16 Moreover, the drugs are barely effective in mild or moderate depression.17

The good news is that studies are finding saffron is a promising treatment for depression and the anxiety that often accompanies it. According to a meta-analysis in Nutrition Reviews, which looked at 23 saffron studies:18

“Saffron had a large positive effect size when compared with placebo for depressive symptoms and anxiety symptoms … Saffron could be an effective intervention for symptoms of depression and anxiety.”

Saffron May Be Useful in Major Depressive Disorder

An estimated 7.1% of the adult U.S. population experienced at least one major depressive episode in 2017 and the majority were prescribed antidepressant drugs. Sadly, many patients stay on these drugs long-term, which may compromise their health. Clearly the chance of substituting saffron in treatment of MDD is an encouraging prospect. Research published in the Journal of Integrative Medicine found that:19

For the three studies that examined the effects of saffron supplementation compared to antidepressant groups (i.e., fluoxetine [Prozac] or imipramine), significant improvements in depressive symptoms were observed among participants in both conditions … Taken together, the findings of the trials included in this meta-analysis indicate that saffron is an efficacious strategy for treating MDD in the short-term.”

The researchers admitted that MDD is a difficult and refractory diagnosis:20

“Remission of MDD is difficult to achieve with less than 50% of patients responding to standard treatments (e.g., antidepressants). For patients who are not responding adequately to an anti-depressant, the two main current treatment approaches are switching drugs or trying alternative approaches such as herbal medicine.”

Another study in the Journal of Affective Disorders also noted fewer unwanted side effects with saffron, while still reaping positive effects similar to those of antidepressants. According to the authors:22

“A number of clinical trials demonstrated that saffron and its active constituents possess antidepressant properties similar to those of current antidepressant medications such as fluoxetine, imipramine and citalopram [Celexa], but with fewer reported side effects.”

The Actions of Saffron Mimic Those of Antidepressants

Though side effects from saffron appear less serious than side effects from prescription antidepressants, the mechanisms of action may be similar, according to research published in the Journal of Pharmacy & Bioallied Sciences:23

It is suggested that the inhabitation of dopamine, norepinephrine, and serotonin reuptake by crocin and safranal [components of saffron] might be the possible mechanism of antidepressive effect of saffron …

Saffron may also be useful against oxidative stress, according to a paper in the Journal of Pharmacy & Bioallied Sciences, which notes that:24

“These medicinal properties of saffron may be attributed to a number of its compounds such as crocetin, crocins, and safranal, which have strong antioxidant and radical scavenger properties to protect against a variety of reactive radical oxygen species and pro-inflammatory cytokines.”

Saffron May Be Useful in Mild to Moderate Depression

Antidepressants are widely seen as ineffective in mild to moderate depression.25 However, studies show that saffron may well treat such conditions. According to a meta-analysis published in the journal Planta Medica, which looked at 11 randomized saffron trials and pooled data from nine studies:26

“… saffron has a significant effect on the severity of [mild to moderate] depression. Available data from randomized, controlled clinical trials support that saffron is significantly more effective than placebo and non- inferior to tested antidepressant drugs.”

A meta-analysis in the journal Human Psychopharmacology also found initial support for the use of saffron for the treatment of mild to moderate depression.27 Like other scientists who have studied saffron, the authors believe its actions are likely due to its “serotonergic, antioxidant, anti-inflammatory, neuro-endocrine and neuroprotective effects.”28

In the six placebo-comparison studies they reviewed, they found “saffron had large treatment effects,” and that “when compared with antidepressant medications, had similar antidepressant efficacy.”29

When depression occurs in certain special patient populations, such as those who are older or who have a history of percutaneous coronary intervention, it can have more serious consequences. Saffron may be a particularly good option for these patients. As noted in a study of older patients published in Psychiatry Research:30

“A total of 50 older out-patients with MDD were randomly assigned either to the saffron condition or to the sertraline [Zoloft] condition for six consecutive weeks … Symptoms of depression decreased over time, with no advantages or disadvantages for the saffron or sertraline condition …

The pattern of results suggests that both saffron and sertraline have the potential to significantly decrease symptoms of depression. The results are clinically relevant, because major depressive disorders in older people is a health concern.

The results are further relevant, because saffron appears to be a powerful antidepressant for older people, who might be more reluctant to the use of synthetic drugs.”

In research published in Journal of Affective Disorders, patients who had received percutaneous coronary intervention were also able to get depression relief using saffron:31

“A significant correlation exists between coronary artery diseases and depression. The aim of this trial was to compare the efficacy and safety of saffron versus fluoxetine [Prozac] in improving depressive symptoms of patients who were suffering from depression after performing percutaneous coronary intervention …

Short-term therapy with saffron capsules showed the same antidepressant efficacy compared with fluoxetine in patients with a prior history of PCI who were suffering from depression.”

Clearly the intriguing plant, saffron, has a lot more to offer than spicing up culinary dishes. The possibility of using saffron for the treatment of depression is great news, considering the many dangers of psychiatric drugs currently on the market.