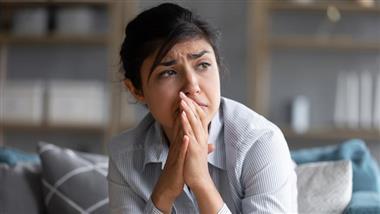 Research published in July 2022 in Human Psychopharmacology found vitamin B6 exhibits a positive effect on anxiety.1 Vitamin B6 is a water-soluble vitamin that acts as a coenzyme in more than 100 enzymatic reactions in the body. Most of these are with protein metabolism.2

The vitamin was first isolated in the 1930s and it has since been found that there are six common forms of the vitamin. According to Oregon State University,3 vitamin B6 is involved in nervous system function, hemoglobin synthesis, tryptophan metabolism, hormone function and nucleic acid synthesis.

Although a severe deficiency is not common, individuals may have an insufficiency of the vitamin. An excess intake of alcohol can increase the risk of deficiency because it impairs the body’s ability to metabolize the vitamin.4

Vitamin B6 and several of the other B vitamins play an important role in heart and brain health. In addition to vitamin B6, vitamins B9 and B12 may be particularly important in supporting cognitive function as you age. As Dr. Michael Greger,5 founder of NutritionFacts.org, points out, being able to control risk factors and slow the onset of Alzheimer’s disease could prevent millions of cases.

Data have revealed that people with dementia and Alzheimer’s have higher levels of plasma homocysteine than those without the cognitive decline.6 The body can detoxify homocysteine using folate and vitamins B6 and B12.7

One study8 was based on the presumption that controlling homocysteine levels could reduce brain atrophy, thereby slowing the onset of Alzheimer’s. After two years those who received the vitamin-B regimen, including high dose folate, and vitamins B6 and B12, had significantly less brain shrinkage compared to the placebo group.

A 2013 study9 went one step further, showing that not only do B vitamins slow brain shrinkage, but they specifically slow shrinkage in brain regions known to be most severely impacted by Alzheimer’s disease. Vitamin B6 is also important for a healthy metabolism,10 immune system, and hair and skin health.11 Added to this impressive list of health conditions impacted by vitamin B6 is anxiety.

According to a double-blind, placebo-controlled study12 published in July 2022, high doses of vitamin B6 may be able to help reduce anxiety. This study was triggered by the results of past work that had suggested B vitamins enhance the production of the inhibitory neurotransmitter γ-aminobutyric acid (GABA).13

The researchers recruited 478 university students and evaluated the participants’ self-reported anxiety and depression at baseline and again after supplementing daily with 100 mg of vitamin B6 or 1,000 micrograms of vitamin B12 as compared to a group that took a placebo.14

Study author David Field is an associate professor at the University of Reading. The idea for the study began in 2017 when he learned of research15 in which data was compared between people who took a spoonful of marmite for a month or a spoonful of peanut butter.16 Marmite is a spread made from a yeast extract and fortified with B vitamins.17

The data from the 2017 study18 showed that activity levels in the brain were lower in the individuals who took the marmite daily. The researchers hypothesized that this happened because of the vitamin B6 in marmite. However, Field noted that he believed there might have been another effect that would explain the findings because marmite is relatively low in vitamin B6.19

In the current study,20 researchers evaluated the effect of vitamin B12, vitamin B6 and placebo on anxiety. The 2017 study measured the increase of the inhibitory neurotransmitter GABA using EEG responses to specific visual stimuli. Field commented:21

“I reasoned that if GABA was increased in the visual cortex and this subtly influenced visual perception, then elsewhere in the brain this could act to inhibit unwanted thoughts and calm the brain down, thus reducing anxiety. For this reason, I also measured the anxiety levels of our rather stressed-out university student participants.”

Data from the study indicated that vitamin B6 supplementation reduced the students’ self-reported levels of anxiety and showed a trend toward a reduction in depression as well, in contrast to vitamin B12, which had very little effect. The researchers also found that vitamin B6 influenced visual contrast sensitivity.

The researchers wrote that22 “… the pattern of results produced by vitamin B6 supplementation in this visual paradigm is the same as that produced by the GABA agonist alprazolam.” This is a class of benzodiazepines used to treat anxiety disorders.23 They went on to write:24

The researchers in the current study were evaluating the efficacy of vitamin B6 against anxiety and they found that administration of the supplement also showed a data trend toward reducing depression. This is significant since there is a relationship between anxiety and depression and conditions often co-occur.25

When an individual has an anxiety disorder, they have a higher likely chance of becoming depressed. People with depression also often feel anxious and worried.26 According to CAMH, Canada’s largest mental health teaching hospital,27 a common antianxiety medication is benzodiazepines.

This group of medications is also used to treat seizures and alcohol withdrawal, as muscle relaxants and to induce sedation for surgery. According to CAMH, benzodiazepines are the most widely prescribed psychoactive drugs.28 However, as the hospital points out, other nonpharmacological treatments can be used to achieve the same calming effect as the drug.

Therapy programs29 often treat depression and anxiety at the same time using cognitive behavioral therapy, exercise, relaxation techniques and antidepressant medications. Yet, like antianxiety benzodiazepines, there is likely a better option since antidepressants may do more harm than good.

Research has revealed there is a price to pay for long-term use. A 2015 study33,34 found that women taking selective serotonin reuptake inhibitors (SSRIs), a class of antidepressants, had an increased rate of bone fracture by 76% in the first year when compared to women taking H2 antagonists or proton pump inhibitors.

Of significant concern is research published in 200935,36 indicating low serotonin is not the cause of depression, and that depression begins further up the chain of events in the brain.

As early as the 1980s,37,38 the National Institutes of Mental Health investigated the connection between depression and low serotonin and concluded there was no evidence of anything wrong in the serotonergic system of depressed patients. Yet, drug companies continued to push the low serotonin theory since it justified the aggressive use of antidepressants.

Magnesium Is Vital for Optimal Health

As Robert Whitaker points out39 in his presentation at a health conference in 2015, the low serotonin theory implies that a person taking an SSRI must take the drug until the end of their life. “You see what a great marketing thing that is? They take a person who has a problem and turn them into a lifelong patient with this story,” he says.40

Magnesium is another essential nutrient that plays a role in mental health. It is an abundant mineral in the body and cofactor in more than 300 enzymatic reactions in the body.41 It is required for the healthy function of most cells, but especially important for the heart, kidneys and muscles. Since it is one of the most abundant minerals in the body, it’s not surprising it has several hundred biological functions.

Promoting mental and physical relaxation is one of those functions. It works by boosting GABA42 and helping boost your melatonin production.43 Additionally, one scientific review,44 which included studies dating as far back as 1937, showed low magnesium may be one of the greatest predictors of heart disease, and more recent data45 show even subclinical magnesium deficiency can compromise your cardiovascular health.

Magnesium is also necessary for the activation of vitamin D,46,47,48 and deficiency may hamper your ability to convert vitamin D from sun exposure and/or oral supplementation. According to Mohammed Razzaque, coauthor of a 2018 study:49

“By consuming an optimal amount of magnesium, one may be able to lower the risks of vitamin D deficiency and reduce the dependency on vitamin D supplements.”

Another 2018 study50 also concluded that your magnesium status plays an important role in your vitamin D status. Overall, people with high magnesium intake were less likely to have low vitamin D. They also had a lower mortality risk from cardiovascular disease and bowel cancer.

Magnesium and B6: A Powerful Combination for Severe Stress

Past animal and clinical research has indicated that magnesium and vitamin B6 have a complementary effect on stress reduction.51 In 2018, the results of a randomized trial were published, which the researchers called “the first randomized trial evaluating the effects of combined magnesium and vitamin B6 supplementation on stress in a stressed population with low magnesemia using a validated measure of perceived stress.”52

While both groups experienced a similar reduction, there was a significant impact on those who had severe or extremely severe stress. According to the data, adults with a depression anxiety stress scale score at or above 25 had a 24% greater improvement when they used the combination of vitamin B6 and magnesium versus just magnesium alone. Those taking the combination also experienced fewer side effects. The scientists wrote:53

“These findings suggest oral Mg supplementation alleviated stress in healthy adults with low magnesemia and the addition of vitamin B6 to Mg was not superior to Mg supplementation alone. With regard to subjects with severe/extremely severe stress, this study provides clinical support for the greater benefit of Mg combined with vitamin B6.”

How to Improve Your Magnesium and Vitamin B6 Levels

The recommended dietary allowance (RDA) for magnesium ranges from 310 mg to 420 mg for adults over age 19, depending on age, gender and pregnancy status,54 and the adult RDA for vitamin B6 is between 1.2 mg and 2 mg per day, depending on age and gender.55

Both magnesium and vitamin B6 are abundant in whole foods. Good sources of magnesium include leafy greens, berries, avocado, seeds and nuts.56 Eating a primarily processed food diet is the primary culprit in magnesium deficiency. If you fall into this group, you’d be wise to take a magnesium supplement as you consider how to start eliminating processed foods from your diet.

It is also important to recognize that a plant-based diet of convenient meatless foods, such as those produced by Impossible Foods, is nothing more than ultraprocessed foods with an associated list of negative health effects.57,58 Fake foods that carry patents are not natural plant-based foods but rather fit the classification of ultraprocessed foods.59 It’s wise to steer clear of these as well as other junk food.

Vitamin B6 is found abundantly in animal foods such as organic, pastured beef and wild-caught salmon, as well as dark leafy greens, papaya, oranges, cantaloupe and bananas.60 Nutritional yeast is another excellent source.61