No Cure for Polio?

OMNS (Nov. 14, 2022) On August 11th, 2022 The National Post stated that there was no cure for polio. They stated this as a fact again the next day. A study of history would dispel this myth. But both the medical profession and the public consider that vitamin C is just a vitamin to be taken in small doses. Yet I have stated for years in my medical column that vitamin C is also an antibiotic and an antifungal that is safe and inexpensive, and saves lives from diseases like polio and 30 other infections. So, it is most frustrating to read that in a national newspaper this nonsense once again about vitamin C. And this is why I’m writing this column to correct this fable. 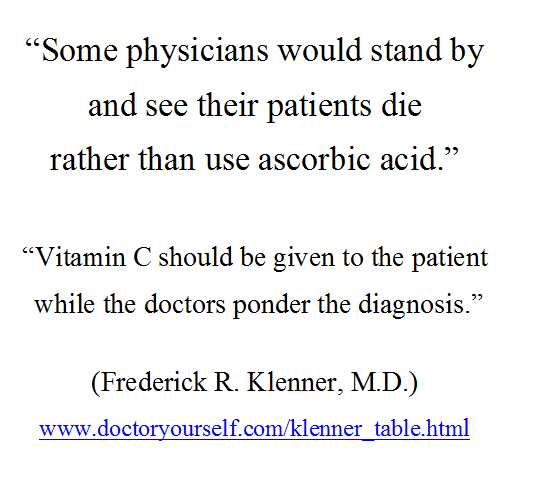 The word polio always sends fear down my spine. It’s because during my final year at Harvard Medical School I developed this disease. I know the terror of the seeing the creeping paralysis of my legs and abdominal muscles and knowing there was no treatment or vaccine available for it during the great epidemic of polio in 1950. Moreover, some hospital cases were in the iron lung. I wondered whether I would be condemned for the rest of my life in this machine where you wish but are unable to kill yourself. Many things pass through your mind on such occasions. But I got lucky and after months of physiotherapy was able to graduate and spend my life as a surgeon and columnist.

From this, you can understand why I have long been sharing documented evidence that shows the huge benefits of vitamin C in fighting a number of diseases including polio.

The evidence that so many North American newspapers continue to ignore is that, many decades ago during an epidemic of polio, Dr. Frederick Klenner carried out an unusual experiment. This southern U.S. doctor, with no training in viral diseases or even a biological laboratory, was asked to care for 60 polio patients. He decided to treat all patients with tens of thousands of milligrams of vitamin C, administered both orally and by injection, in divided doses over several days. https://www.mv.helsinki.fi/home/hemila/CP/Klenner_1949_Polio.pdf All of his patients walked out of the hospital without any paralysis.

Klenner reported this monumental discovery at a medical meeting. But he may as well been talking to a group of well-trained chimpanzees. It is hard to comprehend why this this huge medical finding did not trigger headlines around the world. But it’s not the first time that doctors have ignored a great discovery. Women were dying from childbirth in Vienna, when Dr. Semmelweis decreased this tragedy by simply washing his hands in lime-water following a post-mortem examination. Yet his colleagues dismissed his findings and ridiculed him — until decades later when germ theory became widely accepted.

The Orthomolecular Medical News Service has been publicizing such work for 18 years. Its international medical review board consists of physicians, university professors and researchers who provide a wealth of knowledge on viral diseases. It is an excellent source of material for the media and many editors have regularly received these articles. So why does the National Post tell their readers that there is no cure for polio? Surely someone in this large media company would see this error. I would like to hope that this virus will not result in any person developing polio. But what a tragedy if this happens and the media have failed to tell a paralyzed victim that a combination of intravenous and high-dose oral vitamin C could have reversed it.

The peer-reviewed Orthomolecular Medicine News Service is a non-profit and non-commercial informational resource.

$$$ If you are interested in a writer or editor position, check out here.We are hiring. $$$