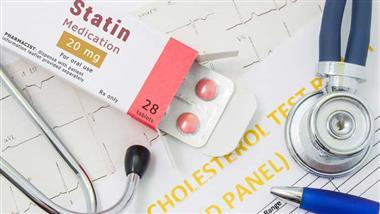 Statins are a type of medication prescribed to lower cholesterol levels. They work by blocking an enzyme in the liver your body uses to make cholesterol.1 Although vilified for many years as causing heart attacks and stroke,2 your body makes cholesterol as it is needed to produce hormones, build cell membranes and produce substances used to digest food.3

Cholesterol is found in foods from animals, such as dairy products and meats.4 Your body makes the fatty substance cholesterol, but it cannot travel in the bloodstream alone.5 The body encases small particles of cholesterol inside protein particles that are able to mix easily with the blood. These are called lipoproteins and they’re responsible for transporting cholesterol.6

One of the main types of lipoproteins is high-density lipoprotein (HDL), sometimes called the “good” cholesterol as its job is to collect cholesterol and deliver it to your liver where it’s removed.7

Prescriptions for statins are written to reduce the levels of cholesterol made by the body.10 However, since your body is so complex, changing one factor often results in unintended events, sometimes called side effects or adverse reactions.11 As suggested by one study, one adverse reaction from statin drugs may be doubling your risk of Type 2 diabetes.12

Past studies have demonstrated that statins increase the risk of diabetes.13 A new study led by a graduate researcher at The Ohio State University14 explored this link in research published in Diabetes Metabolism Research and Reviews. The study was a retrospective evaluation of medical records using employees and spouses from a private insurance plan.

Yearly biometric screening, health surveys, medical claims and pharmacy data were gathered from 2011 through 2014.15 Individuals who had indications for statin use, or who had a previous cardiovascular event, were enrolled. Adults who had Type 2 diabetes before the study or who acquired it in the first 90 days were excluded.

After accounting for factors such as age, gender, ethnicity, education and body mass index, the researchers found those who used statins during the study were two times as likely to be diagnosed with diabetes than those who did not take statin medications.17

Interestingly, individuals who used statin drugs longer than two years experienced an increased risk of more than three times as likely to get the disease.18 The data also indicated that individuals taking statin medications had a 6.5% increased risk of high blood sugar as measured by hemoglobin A1c values.

Take One Medicine for the Side Effects of Another

In 2012, the FDA20 approved changes to labels on statin medications to provide information on adverse events, including reports of increased blood sugar and higher A1c testing. Other side effects listed on the label included cognitive effects such as memory loss and confusion.

While there had been reports of rare but serious liver conditions in those taking statin medications,21 in the same announcement, the FDA22 removed the need for routine monitoring of liver enzymes and recommended they should be performed before starting therapy and then as clinically necessary. Since severe injury was rare, they concluded routine monitoring would not be effective.

The NHS, National Health Services from England, recommends23 statins should not be used in those with severe liver disease since they affect your liver and are “more likely to cause serious problems if you already have a severely damaged liver.”

In 2014,24 one team of researchers discovered adding Glyburide to a statin regimen suppressed the immune response they believed was responsible for the development of Type 2 diabetes. The team led by Jonathan Schertzer, Ph.D., from McMaster University, believed this finding may lead to a next generation of statins. As reported in a press release:25

“Recently, an increased risk of diabetes has been added to the warning label for statin use. This was perplexing to us because if you are improving your metabolic profile with statins you should actually be decreasing the incidence of diabetes with these drugs, yet, the opposite happened.

We found that statins activated a very specific immune response, which stopped insulin from doing its job properly. So we connected the dots and found that combining statins with another drug on top of it, Glyburide, suppressed this side effect.”

In other words, to offset a significant adverse event from one drug, the team recommended the addition of a second drug, which comes with an additional list of side effects including vasculitis, hyponatremia (low blood sodium associated with confusion, seizures and muscle weakness),26 alopecia and liver damage.27

One journalist for Diabetes.co.uk commented on this turn of events, saying: “However, as glyburide stimulates insulin production, using a type 2 diabetes drug to prevent type 2 diabetes seems a peculiar treatment.”28

Statin medications deplete your body of coenzyme Q10 (CoQ10), which may account for some of the devastating long-term results. It was strongly suggested29 the FDA add a black box warning to statin medications to advise patients and physicians about this, but in 2014 the FDA decided against it.30

The reduction in CoQ10 may be responsible for an increased risk of acute heart failure31 and atherosclerosis, as reported in a 2015 scientific investigation.32 The study addressed physiological mechanisms in the reduction of CoQ10, including the inhibition of the synthesis of vitamin K2 necessary to protect against arterial calcification.

A reduction in vitamin K2 may contribute to osteoporosis,33 heart disease,34 brain disease35 and inappropriate calcification.36 Statins have also been associated with an increased risk of neurodegenerative diseases,37 cataracts,38 cancer.39,40 and musculoskeletal disorders.41

In one study,42 a research team evaluated the use of statins in patients with terminal illnesses who had a high likelihood of dying within one year. They found those who stopped taking statins had a mean survival of 39 more days than those who continued to take statins — 229 days without statins and 190 days with statins.

Effectiveness of Statins Lower Than Publicized

How effective a medication may or may not be is expressed as relative risk or absolute risk.44 If the type of risk is not identified it may be difficult to determine whether taking action would affect you.

For instance, if a medication under investigation to prevent prostate cancer enrolls 200 men and splits them into two equal groups, one is likely to receive a placebo and the other is likely to receive the experimental drug. In the placebo group, two men may develop prostate cancer; in the treatment group, perhaps only one man develops it. When compared, the researchers find there’s a 50% reduction in relative risk.

Relative risk is determined by comparing the number between two groups. One man developed it in the treatment group and two in the control group. Since one is half of 2, there’s a 50% reduction in the development of the disease. The absolute risk is far smaller.

Knowing the difference between relative risk and absolute risk is necessary when balancing the benefits of statin medications against the side effects and adverse events. If you are in a position of needing to decide to use statin medications, it’s important to note the relative reduction in risk of a major cardiac event while using statins was between 20% and 25%.

In the case of having to decide whether the potential benefits of statins are worth the known risks, for example, it’s important to consider a report from 2016. In an Expert Analysis article, it was noted that a meta-analysis45 of 27 randomized trials revealed that “[F]or every ~40mg/dL LDL-C reduction with statin therapy, the relative risk of major adverse events is reduced by ~20-25%, and all-cause mortality is reduced by 10%.”

While another study found a similar relative risk, the actual difference in rates of coronary death in the population was 9% in the placebo group and 6.7% in those who were treated with statins.46

Researchers therefore found the difference between the treated and untreated groups was a mere 2.3% and not the inflated relative risk of 28%. They wrote that while the reduction in relative risk appears impressive to some readers, this form of data presentation is misleading.47

Before becoming concerned about your cholesterol levels, it’s important to evaluate whether you really need a statin drug to reduce your risk of a cardiovascular event. Updated guidelines published by the American Heart Association and the American College of Cardiology are based on a personalized risk assessment.48

However, the U.S. Department of Health and Human Services critically evaluates those with cholesterol levels over 200 milligrams per deciliter.49 I believe this total cholesterol measurement has little benefit in evaluating your risk for heart disease unless the number is over 300.

In some instances, high cholesterol may indicate a problem, provided it’s your LDL or triglycerides and you have low HDL. A better evaluation of your risk of heart disease are these two ratios in combination with other lifestyle factors, such as your iron level and diet.

You have control over your health and may protect your heart and lower your risk of heart disease by following suggestions affecting your lifestyle and exposure to environmental toxins.