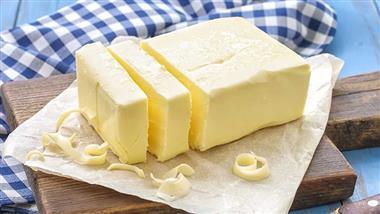 Butter is a mainstay in most kitchens, but debate rages on over the best way to store it — on the counter or in the fridge. The answer is it’s up to you. While you can safely store butter on your counter, there are some caveats to doing so properly. And if you’re not careful, leaving butter out at room temperature can ruin its flavor instead of enhancing it.

On the other hand, if you only store butter in your refrigerator, you’ll be destined to have hard, unspreadable butter when you need it — unless you take it out of the fridge to soften up before your meal. There are also some dishes that require cold butter to turn out correctly. So, some butter enthusiasts recommend keeping a small amount of butter on your counter for daily use and a backup stash of butter in the fridge for recipes that call for it.

Dairy products like milk and cream must be refrigerated for safety, but butter is unique in the dairy world. Because it’s made primarily of fat, with a low water content, it’s not a favorable environment for bacterial growth.1 This means it’s perfectly safe to store butter at room temperature.

You’ll want to keep it in a covered dish or crock to keep out pests and protect freshness. This also keeps it from excess air exposure and light — two factors that hasten spoilage. Your kitchen’s temperature also plays a role in how long butter will last at room temperature. Cooler temperatures will keep your butter fresher, longer, while temperatures much higher than 70 degrees Fahrenheit could impact its quality.2

Speaking with AOL, Caitlin Clark, a food scientist at Colorado State University, explained, “The greater problem with butter is oxidative rancidity, in which oxygen causes fats in the butter to break down and taste rancid, although this does not make it unsafe.”4 U.S. Dairy also states that salted butter stays fresher longer when left at room temperature, as the salt further staves off bacterial growth:5,6

“If you’re a serious supporter of leaving butter out, go with the salted kind. It’s important to note, however, that the amount of salt in different brands of butter can vary. The more salt there is, the safer it may be to leave the butter out on the counter. Regardless of salt quantity, play it safe by limiting time on the counter to no more than a couple of days.”

In addition to keeping butter at just the right consistency for spreading, chef Andrea Uzarowski told AOL that she prefers storing butter on the counter due to taste:7

“Contrary to popular belief, storing it out on the counter does not affect the butter’s flavor in an adverse way … Temperature affects how we taste things as they touch our tongue. When something cold touches our tongues, our taste buds restrict or close up from the cold temperature of the food and this delays our sensations for taste.”

Those on the other side of the fence are in favor of keeping butter in the refrigerator. As an aside, because dairy manufacturers produce large amounts of butter during certain times of the year, it’s often stored for extended periods. According to a study in the Journal of Dairy Science:8

Choosing butter made fresh from a local farm, will help you avoid any off-flavors in your butter due to prolonged storage. That being said, storing butter in your refrigerator can keep it fresher, longer, if you don’t plan to use it right away.

Many people store butter in their refrigerator and take out a portion 30 minutes or so before a meal to allow it to soften. And even chef Uzarowski — who prefers room temp butter — noted, “I do keep a stash of cold butter in the fridge for specific uses, such as making pie crust and specific sauces like beurre blanc, which can only be made with cold butter.”10

Can Butter Be Frozen?

“To keep it tasting as fresh as possible, keep the frozen butter in its original wrapping. You can also wrap it in foil or plastic and put it in an air-tight container. This will make sure the butter doesn’t absorb other flavors. You can freeze it in blocks, sticks or slice it into pats of butter.”

When you’re ready to use the butter, allow it to thaw in your refrigerator first. If you need it right away, a trick is to grate the stick of butter while it’s still frozen. This will help it to thaw quickly and is especially useful if you’re baking.

The introduction of the first Dietary Guidelines for Americans in 1980, which recommended limiting saturated fat and cholesterol, coincided with a rapid rise in obesity and chronic diseases such as heart disease.

As saturated fats fell out of favor, and health officials wrongly urged Americans to avoid such healthy fats as butter, Americans began replacing them with products made from refined vegetable/seed oils, which are among the unhealthiest foods you can consume.

Many are still not eating enough saturated fats, such as those from grass fed butter. In a systematic review and meta-analysis of nine publications including 15 country-specific cohorts, butter consumption was not significantly associated with cardiovascular disease, coronary heart disease or stroke, but increased consumption was associated with a lower incidence of diabetes.12

Why You Should Always Have Butter on Hand

Butter doesn’t have to be viewed as a guilty pleasure. You can indulge guilt-free, as butter is a whole food that contains nutrients your body needs:14

Regarding CLA in butter, it’s not only anticancer but also heart healthy and anti-inflammatory with antiobesity effects as well.15 Sphingolipids, such as ceramides, sphingomyelin, cerebrosides, sulfatides and gangliosides, are also found in butter. These compounds influence cell regulation and have antimicrobial and immunomodulatory effects, while inhibiting cholesterol adsorption. They also have potential anticancer effects. According to Advances in Food and Nutrition Research:

“When consumed, sphingomyelin is transformed to ceramide by sphingomyelinase, and further ceramide is digested to sphingosine and a free fatty acid before being absorbed. Ceramide is known as a cancer cell apoptosis inducer. The consumption of sphingomyelin was related to the prevention of colon cancer in mice and humans.”16

It’s involved in important metabolic processes, and moderate consumption may improve omega-3 fat levels, which could lead to improvements in heart health. The consumption of myristic acid from dairy fat is also linked to increases in HDL cholesterol and decreases in triglyceride levels with additional noted immunomodulatory properties.17

Even the latter two are healthier choices by orders of magnitude than margarine or other vegetable-oil based spreads, but if you can opt for grass fed butter over conventional butter, you’ll get even more nutrients.

This is because milk from cows raised primarily on pasture has been shown to be higher in many nutrients, including vitamin E, beta-carotene and the healthy fats omega-3 and CLA.18 A study published in Critical Reviews in Food Science and nutrition also highlighted the differences in human health after consuming the same foods from animals raised in different ways:19

“Multiple studies have shown that food products from animals raised on pasture instead of grains contain significantly higher amounts of nutrients that may protect against cancer, like omega-3 fatty acids and conjugated linoleic acid.

Due to the general recommendation against dietary fat consumption over the past several decades, there has been a lack of scientific dialogue regarding the differences pasture-raised animal byproducts may have on health and cancer prevention.”

Indeed, they found that while lipid levels remained relatively neutral overall, significant differences were found in inflammatory markers and phospholipids depending on whether the foods came from animals fed grass or grains.

So while debate rages on over whether it’s better to keep your butter refrigerated or at room temperature, a more pertinent issue is the superiority of grass fed butter over conventional. No matter where you store your butter — on the counter or in the fridge — make sure it’s grass fed, if possible.