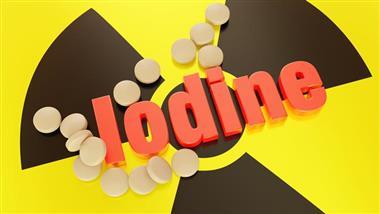 Fear about potential nuclear fallout has resulted in Europeans stocking up on iodine. As reported by Agence France-Presse (AFP), March 8, 2022:1

“European countries have seen stocks of iodine fly off the shelves due to fears it may be needed to counter the risks of thyroid cancer if Russia’s invasion of Ukraine causes a nuclear incident. France said it would send 2.5 million doses of the chemical compound to Ukraine after Russian forces there seized the defunct Chernobyl nuclear site and damaged Zaporizhzhia, Europe’s largest atomic plant.”

Your thyroid gland needs iodine to make hormones that influence your metabolism and other vital functions. Since your body does not produce iodine, you must get it through your diet on a daily basis. When your body lacks sufficient iodine, it cannot make enough thyroid hormone.

In some cases, lack of sufficient iodine can trigger intellectual disabilities and developmental problems in infants and children whose mothers were iodine-deficient during pregnancy.

The recommended dietary allowance (RDA) for iodine ranges from 110 micrograms (mcg) for babies from birth to 6 months of age and up to 150 mcg for men and women over 19 years. Women who are pregnant or breastfeeding have an RDA of 220 mcg and 290 mcg, respectively.5

I always recommend that you get as many nutrients as possible from your food, and iodine is no exception. Foods that are naturally iodine-rich include spirulina,6 sea vegetables, prunes, raw dairy products, eggs and Himalayan pink sea salt.7,8 Eating these foods on a regular basis will help ensure adequate levels year-round.

In the case of nuclear fallout prophylaxis, however, you may need higher doses than these foods can immediately provide — especially if you have not been getting sufficient amounts on a daily basis.

The recommended daily dosage of potassium iodide for an adult in the case of acute nuclear radiation exposure from a nuclear reactor accident or a nuclear weapon detonation, is 130 milligrams (mg).9 For optimal protection, the iodine would ideally be taken one hour before the radiation exposure, and no later than 12 hours’ post-exposure.

Why Use Iodine in Case of a Nuclear Accident?

In the case of a serious nuclear accident, radioactive iodine can be released into the air, increasing your risk of thyroid cancer and acute radiation sickness when inhaled.10

Thyroid cancer seems to be the only cancer whose incidence rises after a radioactive iodine release. Potassium iodide protects only the thyroid, but it is the organ at greatest risk from radioactive iodine. ~ Thyroid.org

“The thyroid gland cannot distinguish between stable (regular) iodine and radioactive iodine and will absorb whatever it can … Babies and young children are at highest risk. The risk is much lower for people over 40. Thyroid cancer seems to be the only cancer whose incidence rises after a radioactive iodine release. Potassium iodide protects only the thyroid, but it is the organ at greatest risk from radioactive iodine.”

The American Thyroid Association recommends that anyone living within 50 miles of a nuclear plant have potassium iodide in their household at all times in the event of a radiation emergency.12

However, you should only take potassium iodide if you are near active radiation fallout. This is NOT a strategy that should be used as a long-term preventive because it only protects your thyroid for one to three days, no longer, and taking it when not absolutely necessary could result in thyrotoxicosis.

Iodine Does Not Protect Against Other Radioactive Elements

It’s also important to realize that iodine does not offer all-around protection in the case of nuclear fallout. As mentioned, it only protects against radioactive iodine, and it primarily protects your thyroid. It does not protect against any other radioactive elements.

Authorities typically recommend sheltering inside a hard building in the case of nuclear fallout. But there may also be some other things you can take to help your body protect itself against radiation. Three supplements that come to mind are vitamin D3, magnesium and molecular hydrogen.

Vitamin D’s protective action is carried by a wide variety of mechanisms, including cell cycle regulation and proliferation, cellular differentiation and communication, and programmed cell death (apoptosis). Scientists have identified a total of nearly 3,000 genes that are upregulated by vitamin D, so it makes sense that it would have multifaceted protective actions against cellular damage.

A paper on the subject argued that vitamin D should be considered among the prime nonpharmacological agents that offer protection against low radiation damage and radiation-induced cancer — and perhaps even the primary agent. According to the paper, published in the International Journal of Low Radiation:13

“In view of the evidence that has been presented here, it would appear that vitamin D by its preventive/ameliorating actions should be given serious consideration as a protective agent against sublethal radiation injury, and in particular that induced by low radiation.”

Ideally, the BEST way to get vitamin D is from sun exposure on your bare skin. This typically requires going out every day in the sun around noon to get enough UVB to generate vitamin D. We are entering the time of year where most people in the U.S. can do this for the next six months.

Sun exposure will also increase melatonin in your mitochondria, which is yet another fantastic method to reduce excess oxidative stress that can be exacerbated by exposure to ionizing radiation.

Rather than focusing on a specific dosage, your best bet is to measure your vitamin D level (which is done through a simple blood test) and then take whatever dosage required to raise or maintain an optimal level, which is thought to be between 40 ng/mL and 60 ng/mL. In one investigation, compared to having a blood level below 20 ng/mL, having a level of 60 ng/mL or higher resulted in an 82% reduction in breast cancer.14

Getting tested, ideally twice a year, is really the only way to determine if you have a protective level and are taking the correct dosage. If you are not getting sun exposure, most adults need about 8,000 IUs of vitamin D per day. Please remember though that this is a vastly inferior way to get vitamin D and in no way shape or form will increase your mitochondrial melatonin levels.

How Magnesium Can Help Protect Against Radiation

One of the interesting facts I learned when I wrote my 2020 book, “EMF’D” was that nonionizing radiation from cell phones cause cellular harm nearly identical to that of ionizing radiation, as you can see by the image below. 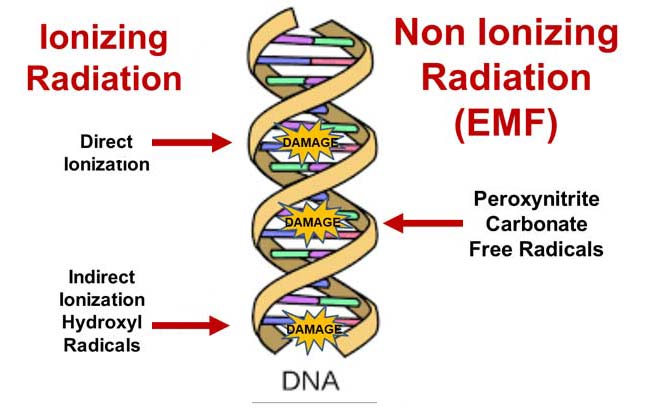 Research15,16,17,18 shows low-frequency microwave radiation activates voltage-gated calcium channels (VGCCs) — channels in the outer membrane of your cells. Once activated, the VGCCs open, allowing an abnormal influx of calcium ions into the cell, which activates nitric oxide (NO).

NO is the only molecule in your body produced at high enough concentrations to outcompete other molecules for superoxide, which combines to form a very dangerous free radical called peroxynitrite. Many believe peroxynitrite is as bad or even worse than hydroxy free radicals as they last so much longer. Peroxynitrate increases systemic inflammation and mitochondrial dysfunction,19 and damages your DNA.20

One of the strategies that we recommend to limit this damage is to make sure you have enough magnesium. Why? Well first of all, more than 80% of people are deficient and magnesium is part of over 3,100 proteins and enzymes in your body. But in the case of radiation, it will likely serve as a calcium channel inhibitor and limit the amount of calcium coming inside the cell, which will limit free radicals.

There is virtually no downside to supplementing with magnesium as even if it doesn’t help mitigate oxidative stress from ionizing radiation exposure, which I believe is unlikely, it will benefit you in thousands of other ways. It is one of the few supplements that virtually everyone needs to be on.

Last but not least, molecular hydrogen may also be helpful in cases of low-level radiation exposure. As explained in the 2012 paper, “Molecular Hydrogen and Radiation Protection”:21

“Molecular hydrogen (dihydrogen, H(2)) acts as a therapeutic antioxidant by selectively reducing hydroxyl radicals (OH) and peroxynitrite (ONOO-). It has been well-known that ionizing radiation (IR) causes oxidative damage and consequent apoptosis mainly due to the production of OH that follows radiolysis of H(2)O.

Our department reported the protective effect of H(2) in irradiated cells and mice for the first time, and this effect is well repeated by us and another laboratory in different experimental animal models.

A randomized, placebo-controlled investigation also showed consumption of H(2) can improve the quality of life of patients treated with radiotherapy for liver tumors. These encouraging results suggested that H(2) has a potential as a radioprotective agent with efficacy and non-toxicity.”

A simple way to protect against this damage is to upregulate your Nrf2 pathway, which can be accomplished by drinking molecular hydrogen water and making sure you’re getting enough magnesium.

In a study22 from 2010, the researchers suggested hydrogen therapy “may be an effective and specific novel treatment for acute radiation syndrome.” The key mechanism by which molecular hydrogen protects against radiation is by reducing hydroxyl radicals, which are responsible for more than half of the cellular damage associated with ionizing radiation.

How to Optimize Your Iodine Absorption

While women have a greater incidence of iodine deficiency related to their hormone production, the bodies of both men and women are subject to the poor absorption of iodine and suboptimal use due to environmental contamination that end up in the food supply.

Common contaminants that compete with iodine include the following. By avoiding or eliminating these from your diet, you can help optimize iodine uptake from the iodine-rich foods you eat, some of which were listed earlier.